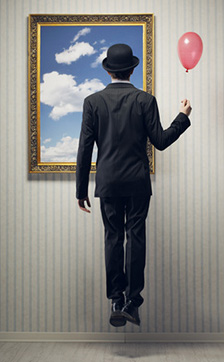 I’ve been to a lot of organized networking events over the years. I’ve grown to hate them. You stand around with a bunch of strangers, armed with a huge stack of business cards. Your mission: Hand out as many as possible in the shortest amount of time. You make quick eye contact with someone, hand them a card, and say a few pleasantries. Then it’s off to the next prospect. Repeat until your stack of cards is gone or your beer glass is empty, whichever comes first.

Unfortunately, it’s just like sending out a bunch of unsolicited resumes. It ends up being a colossal waste of time. I don’t think I’ve ever made a lasting contact this way. I do however, have a drawer full of business cards that keeps growing over time. The problem is the format. Business cards and eye contact don’t equal a business relationship.

I have discovered something that works better. I’m in the process of writing a new book, a manifesto of sorts, and as part of the project I’ve decided to develop 50 friends in 50 weeks. It’s based on the idea of creating your own network, with some ideas from a book by Derek Coburn, entitled Networking Is Not Working.

I started with some of my Toastmaster contacts, by just asking if we could meet for a half hour or so at a local coffee shop. Most people agreed and were excited to hear about my writing project. When we met, I described the major concepts of the book and asked for their feedback and experiences on some of the major tenets in the volume. The results have been amazing.

People love to share their experiences and it turns out in almost every case that we have something major in common. The real secret is spending time, asking questions, and listening intently.

After doing this for a few weeks, I came up with an acronym for the process. It’s actually really simple…

It’s based around the word LIFT.

To start the meeting off, I usually engage with a story. One of my favorites is Life in a Silver Box. It’s a powerful, visually based tale that deals with the realities of death. It always instills a response. Some people react with surprise, others with sadness or remorse. Almost everyone has had an experience related to it. It’s during this time that I truly listen. That’s when the conversation begins. Within minutes we are usually trading experiences and ideas and almost always find some common ground.

Many of the stories and experiences I’ve heard are very emotional. It’s not uncommon to have tears flowing one minute and laughter the next. What happens after death hits really close to home. I can tell you that many of the stories I’ve heard will be woven through the fabric of the book. Some as complete stories, others as pullouts, and some just as quotes.

By following this simple LIFT outline, I’ve developed a lot of new contacts. Many of which will be directly involved with submissions for my book. Better yet, I’ve heard a lot of stories, and developed some amazing new friends. People that I would never have met at a networking event. People whose stories have torn at my heart, made me laugh and made me cry. People that you will truly want to meet.

You’ll get a chance, someday soon…