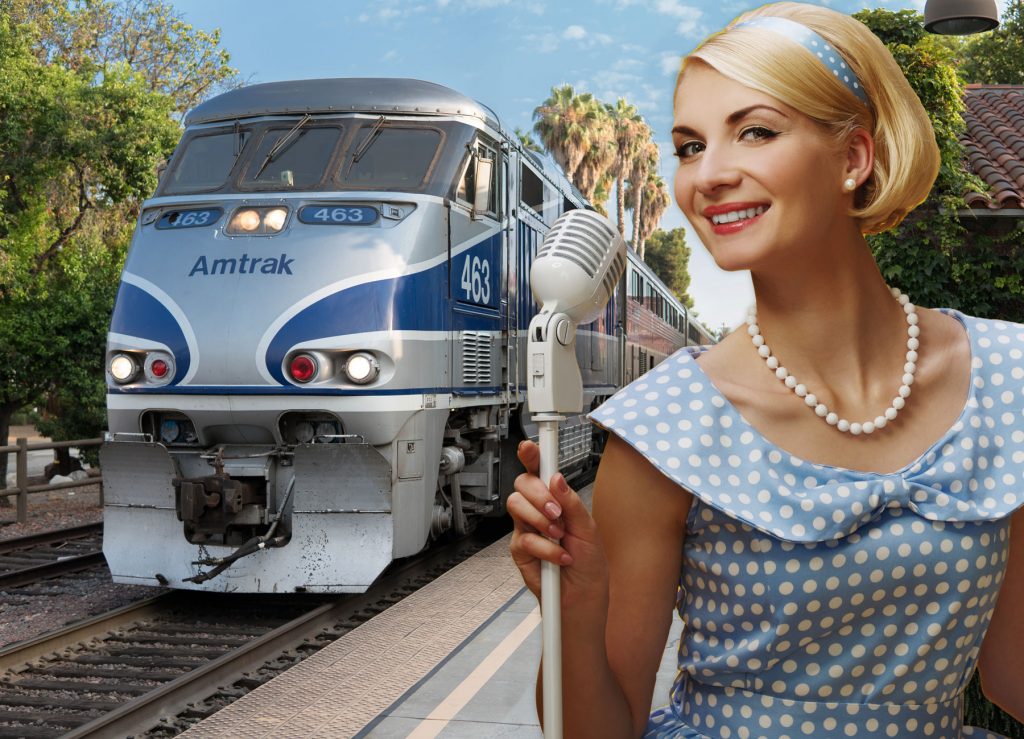 Sally took the Amtrak north out of San Diego. Dressed in pearls and a polka dot dress, she was looking for a new life. Her husband of three years had left her the month before. She had a little boy named Robert-two years old- who was staying with Mom till she got settled. With her life savings of five hundred dollars in her purse, she got comfortable in her seat and looked out the window.

Getting settled, she thought, was the adventure she was on. Taking the train to some far away destination. The year was 1970, the month was May. The weather was pleasant and Sally knew that she would go till she could go no further. She figured the train would take her north to Oregon or Washington. Maybe she would end up in Portland or Seattle. Far enough away to forget the bad times and start a new life.

She hadn’t figured on the train breaking down in San Juan Capistrano, only ninety minutes away from the painful memories in San Diego. But breakdown it did. Blew the engine right out the side of the locomotive. Smoke and fire and lots of excitement. As she exited the train with her suitcase, she sought providence and a place to stay. It was midday and the sun was hot. She looked around, got her bearings, then walked across the tracks and headed down a tree-lined street adjacent the tracks. Los Rios historic district was the name painted on a fence. She had made a pact with herself-one part grit and one part prayer-that she would go until an answer came. That’s when she saw the sign.

It simply said, Room for rent. It was stuck on the front gate of an old house halfway down the narrow avenue. She walked in, met an older Hispanic woman and made a deal right then and there. Fifty bucks a month with use of the kitchen. Private bath and an external door so she could come and go as she pleased. A hundred bucks first and last.

Now that she had a place to settle in, she needed lunch. She asked her landlord Maria for advice. “Any good places to eat in town?”

Maria smiled. “There are a few, but the most consistent is El Adobe. One block down to the right. Good food and the price is right.”

After a short five minute walk, Sally found the restaurant. It was housed in an original adobe structure from the 1700’s. A good-looking young waiter smiled at her and asked for her order.

“Got any specials,” she asked.

The waiter nodded. “One of our best today. Chilaquiles.”

The waiter leaned in and pointed to the description on the menu. “Chilaquiles are corn tortilla pieces that are fried, cooked in salsa, and sprinkled with cheese. We serve them for brunch with eggs and a side of beans. Today we have them with marinated chicken pieces. Delicioso, senorita.”

Sally put her menu down and replied with gusto, “Chilaquiles it is.”

The waiter said, “You will not be sorry senorita, The chef’s name is Humberto. He is part owner and the best cook in town. Your taste buds will explode with pleasure. I guarantee it.”

Sally laughed and noticed the waiter’s name badge. It said, Humberto too. “I see you have the same name as the chef. Any relation?”

The young waiter replied, “He is my uncle. Famous man in town. He got me this job. Very generous. I like working here.”

Sally nodded, “I’m new in town. Do you think he could get me a job?”

Humberto stood back for a second, then replied, “Do you know how to sing? We just lost Julia our serenader. She sings at night with our guitar player, Pablo, but now is very pregnant. Nothing too hard. Just a few songs, a pretty face, and a soothing voice. The audience tips really well after a few margaritas.”

Sally shrugged. “Do you think your uncle would hire a blonde to sing in a Mexican restaurant? I don’t know Spanish.”

“Why not. Most of our customers are gringos. Some of the songs are in English.” Humberto went up to the front counter, picked up a book and put it on the table in front of her. “Tell you what. Take this songbook, practice a few bars and come back tonight at six. I’ll introduce you. What’s your name?”

He shook his head. “Sally what?”

He shook his head again. “That won’t work. What’s your middle name?”

“Perfecto. Sally Ann is it.”

Sally smiled. “What should I wear?”

“Come just as you are. The pearls and polka dots are cute. Completely the opposite of Pablo. He looks like a gunslinger with a bad haircut.”

He laughed. “Maybe you’ll soften up his image.”

Sally nodded. “OK, I’ll be back at 6. Now bring on those Chilaquiles.”

In a few minutes, Humberto brought out a huge plate of fried tortillas in green sauce, covered with chicken and sour cream.

“Oh my God,” she replied as she took the first bite. “These are wonderful. As you say, Muy Delicioso.”

“I told you. Humberto would not lie to you. The food here is very good.”

As she dug into the plate, she perused the songbook, recognizing very few of the tunes. In a few minutes, as Humberto brought out the check, she said, “I’ve sung in the church choir for years, but never have I belted out the song, Tequila, during service. This should be fun.”

Humberto picked up the check as she went for her wallet and tore it in little pieces. “The food is on me Senorita Sally Ann. Come back at six and let’s hear your rendition of that drinking song. That one helps us sell a lot of booze. The audience usually gets into it.”

Sally went back to her new digs in Los Rios and looked at the songbook. Most of the songs were in Spanish. This was going to be a problem. She tried a few, but couldn’t get the words or the accent right. She really needed the job if she was going to make it in this new town. She tried a few more but ended up after fifteen minutes in tears. It was hopeless.

She walked up to the front of the house and talked with Maria. “Can you teach me these songs? I don’t know Spanish and I have an audition tonight at six at El Adobe.”

Maria said, “There is no way I can teach you the language and the pronunciation in that short a time. But I do have a songbook that might work for you. Come with me.” Maria walked into her living room, sat down at her piano and pulled out a songbook from a stack on the mantle.

“Here it is,” she said. “A gringo songbook. One of my favorites. I’ll play the tune on the piano, you sing along.”

Sally recognized the songs immediately and within minutes she was crooning the tunes expertly along with Maria.

She said, “These songs are great but will Pablo be able to play them? Will anyone want to hear them in a Mexican restaurant?”

Maria smiled, “Pablo can play anything. Just take him the book. As far as the restaurant goes, I don’t know. Humberto is very kind. You’ll just have to audition and see.”

At six o’clock, Maria showed up and was introduced to Uncle Humberto. He was a large man with a vibrant smile. He said, “So you want to sing at El Adobe? Maria called me and told me you are a good singer and that you would be bringing a gringo songbook with you. I tell you what, Give me the book and we’ll go out front onto our little stage. A trial by fire in front of our patrons. If they like your singing, you’ve got the job. Pick three songs and let’s go.”

Sally was nervous but folded back the corners of three pages, and Uncle Humberto gave the book to his guitar player Pablo. He spent a minute tuning his six-string and then stood ready. Humberto took the microphone and said, “Ladies and gentleman, I want to introduce our new talent, Sally Ann. She has three favorites of hers for your enjoyment.”

Pablo picked up his guitar and started playing the first song. Sally picked up the microphone and started with Patsy Cline’s wonderful song, I Fall to Pieces.

Sally’s voice was so smooth and she made such a contrast to Pablo. The audience went crazy.

She followed with the songs, South Of The Border (Down Mexico Way) and San Antonio Rose.

The audience stood and went nuts. A stand ovation. A country singer in a Mexican Restaurant. Who would have guessed?

That was the start of a lifelong singing career for Young Sally Ann, known fondly to her audiences as the Princess in polka dots and pearls. She fondly remembers how she ended her audition on her first night. Pablo along with Humberto on trumpet finished the set with a rousing rendition of Tequila. But as the music came to the part where they would say the word tequila, Sally replaced the word with Chilaquiles!