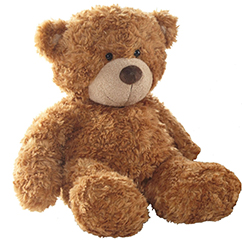 When I was a little kid, I had a teddy bear. This little stuffed animal went everywhere with me. It became my best friend and loyal companion. I had long conversations with my bear, and put him in strategic places, where he would be safe but could watch over things. Over the years, Charlie, as I called him, became ragged and torn, but that didn’t mean I loved him any less. Charlie the Bear was a lifetime friend.

My grandmother understood Charlie. She could talk to him, and understand him, just like I did. When I went to Momo’s house, I always took Charlie with me. The funny thing was, Charlie came alive at Momo’s house. We had wonderful conversations and adventures, which always included my grandmother. Charlie, Momo and I, played the organ, read books, and put puzzles together. Charlie had a prominent place on the top of the couch as Grandma and I would struggle to find just the right piece of the puzzle to complete the picture.

Over the years, Charlie stayed home more, but I still loved to go to Momo’s house. She was my rock. Momo always had time for me. She was always interested in what I was doing. And most importantly, she always prayed for me. I’m sure those prayers are what got me through my teenage years.

One day, when I was in college, it was decided that Momo would move from California back to Alabama, where she could live in a senior home that would take care of her. It was a sad day. That was the last time I ever saw my grandmother. I received a few cards and pictures from her but she died a few years later. My rock was gone.

Life went on for me. I finished college, got a job and married. But it wasn’t until I moved into my first house, that I discovered Charlie the Bear again. He had been put in a box. He was torn and tattered, with most of his stuffing missing, but holding him in my hand that day brought back all those early memories of Momo, me and him.

There is something about stuffed animals and Grandmas that just go together.

How to Outlive Your Life

I was reminded of that the other day while at a church. I was watching a presentation for our above 50 ministry, when the presenter went around the room and asked if anyone had a birthday during the month. One of the people that stood up was a woman named Alice who had turned 91. The pastor mentioned that Alice was still sewing stuffed animals by hand, and giving them out to little kids at church and in the community. She held up this amazing little stuffed white unicorn, with red stitching. Thoughts of Momo and Charlie roared back into my head.

I’ve often wondered about the legacies that we leave. I know this for sure. Those little stuffed animals will change so many tiny lives, year after year. Just like Charlie the Bear did for me.

Alice’s contribution to the community will live on for decades to come.

She will truly outlive her life.