When I was in grade school I was a very shy kid. I enjoyed school and did well, but when it came to talking in groups, especially with adults, I usually kept quiet. Inside though, I always had a conversation going. I loved to think through things, form opinions, and create new ideas. Unfortunately, many of these great ideas would never escape. I was too afraid to share them. 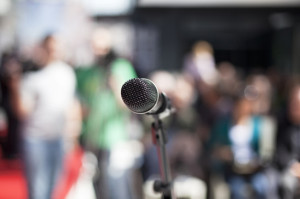 In second grade I had a teacher named Mrs. Reyer. She was a great educator and had two special abilities that very few people have. The first was the ability to read minds. Somehow she could see all these ideas rolling around in our heads. With just a few questions, she was able to engage with the whole class. We would develop great conversations, and she was able to extract these ideas in a powerful way. She could get us to share what was inside, with everyone in the classroom.

Her other uncanny ability was to predict the future. One day we were talking about former presidents in class. She went around the room and had some of us stand up and share about the former leaders of our country. Most of the kids picked Washington or Lincoln, but when she came to me, I stood up and talked about John Adams. She was so encouraging. I can remember standing by my chair as straight up as I could and told about a president that had the same name that I did. I spoke loud and forcefully. Totally unlike my usual self. I talked about how Adams had been one of the architects of the Declaration of Independence and became our second president.

When I was done, Mrs. Reyer looked at me with a beaming smile. She said, “John, someday you’ll be a politician or a public speaker.” I’ll never forget those words. To a shy little kid, her statement resonated. All of a sudden, I realized I could share with others and that my ideas were important.

Over the years, her words have come back to me many times. While I’ve never become a politician, I have found the love of public speaking. As part of a Toastmasters group for over 18 years, her comments propelled me on with hundreds of speeches and presentations. Now that I’m a trainer, those powerful words in the back of my mind always instill confidence.

I never saw Mrs. Reyer after elementary school, but her legacy lives on. I’m sure that many other students, along with me, carry on her tradition of engaging a conversation and sharing with others.

Her motivational words… Someday you’ll be… affected a lot of our lives.

They certainly have changed mine!