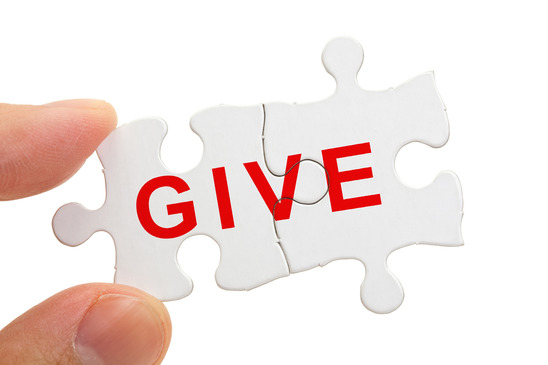 We’ve all heard the old adage, “It’s better to give than receive,” yet if you have tried being a giver for any length of time, you may have noticed the doormat effect. People suddenly take it for granted that you’ll help out or do a task repeatedly without complaint. The “takers” in the world jump all over this. You may find yourself in an unpleasant job for years because of your generosity.

Because of this, I’ve often wondered if giving is really worth the trouble. It certainly doesn’t seem fair, and on the surface, selfless giving just seems like a bad deal. You put in a lot of sweat and tears and get a reputation as a pushover in the process. Burnout seems inevitable. I’ve seen it over and over.

Yet some people seem to thrive in giving.

In doing research for my new book, I decided to look at the statistics of giving. Is it something to applaud or is it something to avoid like the plague? One of the best resources on the subject, is a new book from author Adam Grant, entitled Give and Take. In it, Adam lays out extensive research on the subject. He finds there are three types of people.

Across occupations, it appears that givers are just too caring, too trusting, and too willing to sacrifice their own interests for the benefit of others. There’s even evidence that compared with takers, on average, givers earn 14 percent less money , have twice the risk of becoming victims of crimes , and are judged as 22 percent less powerful and dominant .

So if giving is so bad, which of the other two types, takers or matchers, was at the top?

I figured, for sure, it would be the takers…

It turns out that neither of these are found there. It’s actually the givers again. In sales, Adam found that the top performers were givers, and they averaged 50 percent more annual revenue than the takers and matchers. In higher education, over the course of medical school, being a giver accounts for 11 percent higher grades.

Wow! I didn’t expect that.

So here is the million dollar question… What is the difference between a giver on the top rung of success and one on the bottom?

It appears to be a simple dichotomy… Adam suggests that selfless giving suffers..

If people give too much time, they end up making sacrifices for their collaborators and network ties, at the expense of their own energy. If people give away too much credit and engage in too much powerless communication, it’s all too easy for them to become pushovers and doormats, failing to advance their own interests. The consequence : selfless givers end up exhausted and unproductive.

Adam explains the secret this way…

If takers are selfish and failed givers are selfless, successful givers are otherish: they care about benefiting others, but they also have ambitious goals for advancing their own interests.

How To Be a Giver

So the real secret to being a great giver is to care about giving to others but also be concerned with your own personal success. Adam gives this overview…

Selfless giving, in the absence of self-preservation instincts, easily becomes overwhelming. Being otherish means being willing to give more than you receive, but still keeping your own interests in sight, using them a guide for choosing when, where, how, and to whom you give.

Overall, I found Adam’s book to be incredibly insightful. I’ve always wanted to be a strong giver, but the side effects always made me pull back. His research gives many positive ways to give, without becoming a doormat or pushover. I will certainly be using his suggestions to move forward on the giving scale. I highly recommend that you pick up a copy of Give and Take.